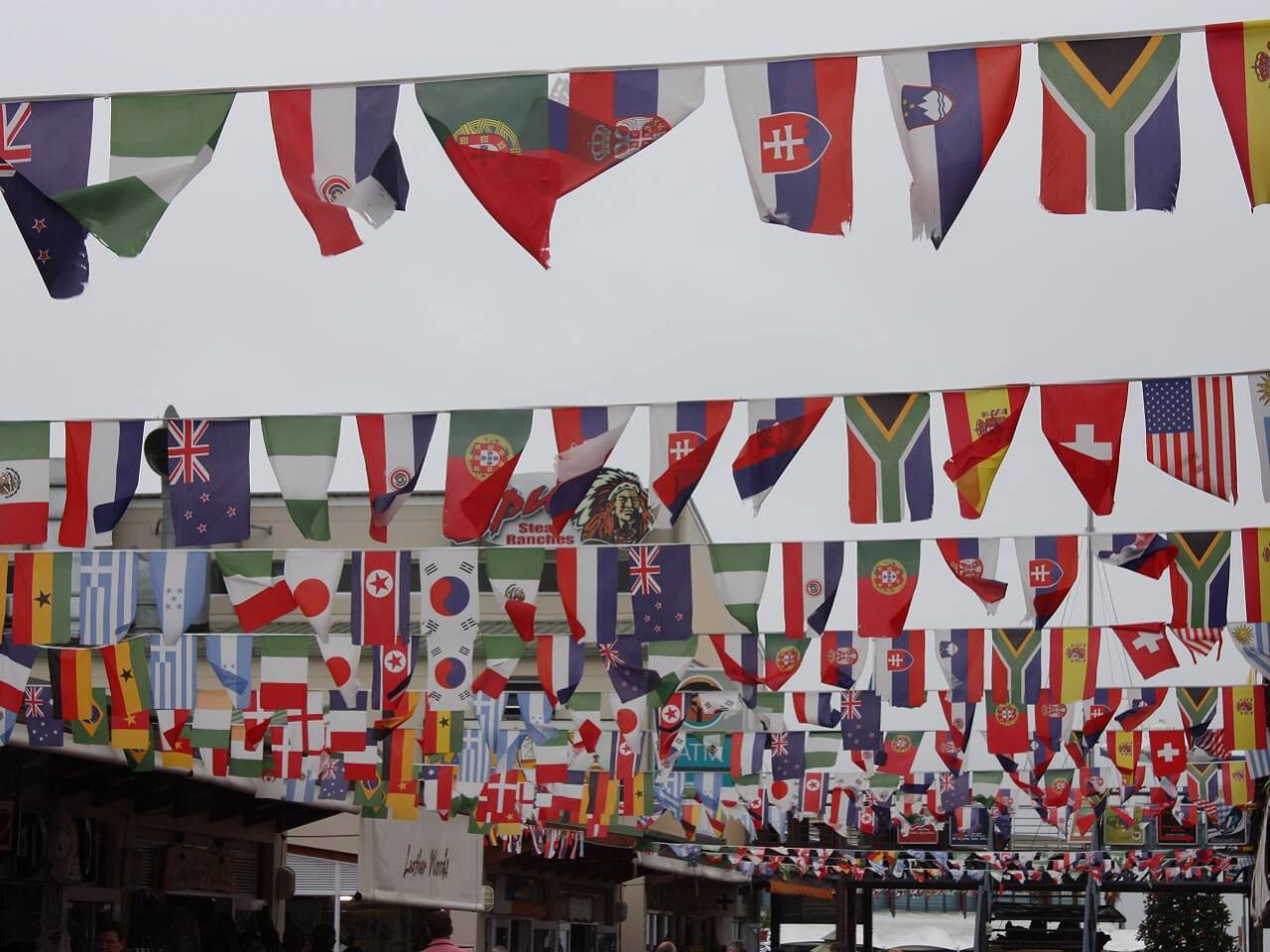 At first glance, patriotism might seem like an issue of secondary importance, a mere distraction. Our ultimate loyalty is to the Kingdom of God, after all, and we are already pretty busy. Among restoring a desecrated liturgy, salvaging Catholic education, and coping with the current papacy, the layman who wants to contribute to Catholic culture would seem to have his hands full. Yet all the great controversies of our time, it seems to me, are touched by the patriotic question. It is no coincidence that Poland is simultaneously the most nationalist and the most unabashedly Catholic country in Europe. Nor is it a coincidence that the same pope who has sown so much confusion with regard to perennial teachings should also make international headlines by insinuating that good Christians must oppose border control. If we are to effectively combat the forces that degrade our world and undermine the Church, we must think about the patriotic sentiment and its role in human affairs.

Gratia non tollat naturam, sed perficiat: Grace does not eliminate nature, but rather completes it, Saint Thomas Aquinas tells us, thereby marking the metaphysical and theological divide of modernity. On one side of the divide, we find the Catholic tradition, which has always taught that the power of the sacraments heals human nature and bring it to its rightful state of perfection as an image of God. On the other side we find utopian, neo-gnostic revolutionaries who reject Aquinas’s dictum, who see human nature as a prison from which the Gospel liberates us. Since patriotism is part of said human nature, the campaign to abolish nationality is best understood as one of the most hotly contested fronts in a larger campaign to abolish man.

Those of us who recognize love of country as healthy, good, and Christian are not at all surprised to find it turning up in all sorts of places. An excerpt from a certain well known song, for instance, suggests just how much rootedness was once taken for granted:

We pray for our Mother, the Church upon Earth
And bless, dearest Lady, the land of our birth.
Ave, ave, ave Maria! Ave, ave Maria!

Note here that these lyrics make no mention of political ideals – freedom, or equality, or rights – but simply affirm affection for one’s native soil. Even if we did not know this hymn’s history, we could easily guess that it was written not today, but in a time when living in the country of one’s origin was normative.

Turning to explicit papal teachings, in Sapientiae Christianae, Leo XIII points out how “the natural law enjoins us to love devotedly and to defend the country in which we had birth, and in which we were brought up, so that every good citizen hesitates not to face death for his native land.” What is interesting here is that said encyclical is not, on the whole, a celebration of patriotism, but instead aims to remind citizens that their duties to their respective homelands can never override their duties to the Church. Patriotism was not at all the point, because in Leo’s day, it could be taken as an uncontested premise.

This evokes a striking thought. Maybe we don’t find patriotism explicitly commended more often in the Bible and other authoritative sources for the exact same reason we find no precise prohibitions against transgender bathrooms or abortion: until the open revolt against human nature initiated during the Enlightenment, these simply weren’t issues. That is, until relatively recently, no prominent voices were lunatic enough to challenge patriotism, the distinctions of male and female, or a mother’s obligation to nurture her child.

In any case, in addition to Leo XIII’s remarks, the reader may consider the relationship between patriotism and faith as outlined by Saint Pius X in an address made to French pilgrims:

Yes, your country is worthy not only of love but of predilection, whose sacred name awakens in your minds the dearest memories and thrills all the fibers of your soul, this common land which has been your cradle and to which the bonds of blood and that other more noble community of affections and traditions attach you.

But this love of the native soil, these bonds of patriotic brotherhood, which are common to all countries, are stronger when the terrestrial country remains indissolubly united to that other country, the Catholic Church, which knows neither differences of language nor the barriers of mountains and seas, which embraces both the visible world and that beyond the grave.

In other words, argues Pius X, patriotism is nourished rather than negated by the Church. Being Catholic does not mean repudiating one’s national identity, but that there is a higher plane, an imperium of Christ whereby men of all nations may be joined in communion.

Before it became fashionable to pretend that nations can be woven purely out of thin air and democratic ideology, it was universally understood that a nation is something like a great, multifaceted family, and that the normative way of belonging to this family is by being born into it. For the sake of those whom our politically correct climate has rendered squeamish and hypersensitive, I suppose I should add that this hardly implies an unwholesomely rigid ethno-nationalism. For a person might be adopted into or marry into a nation, just as one might be adopted into or marry into a family.

Here arises a critical point: to be adopted into or marry into a family, surely, the family must exist. It must have some very distinct core identity. Likewise, to be adopted into or marry into a nation, the nation must exist. That is, it must be a coherent community with its own distinct heritage, shared history, and common memories, not a random assemblage of disconnected individuals from anywhere and everywhere. Thus, attempts to make the family more “open” and “inclusive” run exactly parallel to attempts to make the nation more “open” and “inclusive.” Such efforts dissolve and render meaningless the very institutions they purport to improve. The unnatural and dysfunctional 21st-century “family” and the post-cultural, egalitarian “nation” are two expressions of one and the same project.

Here, then, are the fundamental reasons for the populist revolt that grabbed British and American headlines in 2016, as well as for the extraordinary overt hostility some wags call “Trump Derangement Syndrome.” The West is in the throes of a cultural and even metaphysical civil war. On one side of an unbridgeable chasm stand proponents of equality and inclusivity, who see it as self-evident that we must accord the same consideration to everyone, regardless of where he comes from; how he relates to us; and whether he is a kinsman, a longstanding neighbor, or a total stranger. When they are liberal Catholic, such proponents of equality and inclusivity are wont to identify their moral perspective as the very essence of Christian ethics, and, in their view, to deviate from such a perspective is to compromise if not betray the Gospel. On the other side of the chasm stand those who emphasize a commitment to their respective hometowns, home states, and homelands and who deeply resent the ostentatious zeal so often exhibited by would-be humanitarians sheltered from the consequences of globalist policies. When such populists and counter-globalists are Catholic, their inclination is to point out with alarm the way Church teachings have been oversimplified, truncated, and even distorted for the sake of what looks very much like Rousseau’s fetish of the noble savage.

As an unabashed counter-globalist myself, I must add that we have figures such as Saint Augustine on our side. “Since one cannot help everyone,” says the author of De Doctrina Christiana, “one has to be concerned with those who by reason of place, time, or circumstances, are by some chance more tightly bound to you.” In practice, this suggests that charity begins at home, that we owe greater attention to our neighbors, kin, and countrymen than to those on the far side of the world.

Needless to say, by the standards prevailing in many parishes today, Augustine’s teaching is petty and provincial, if not “xenophobic,” and must be revised to conform with modern sensibilities. It seems to me, though, that the new and improved gospel preached by globalists has more to do with the Tower of Babel than with Christ.