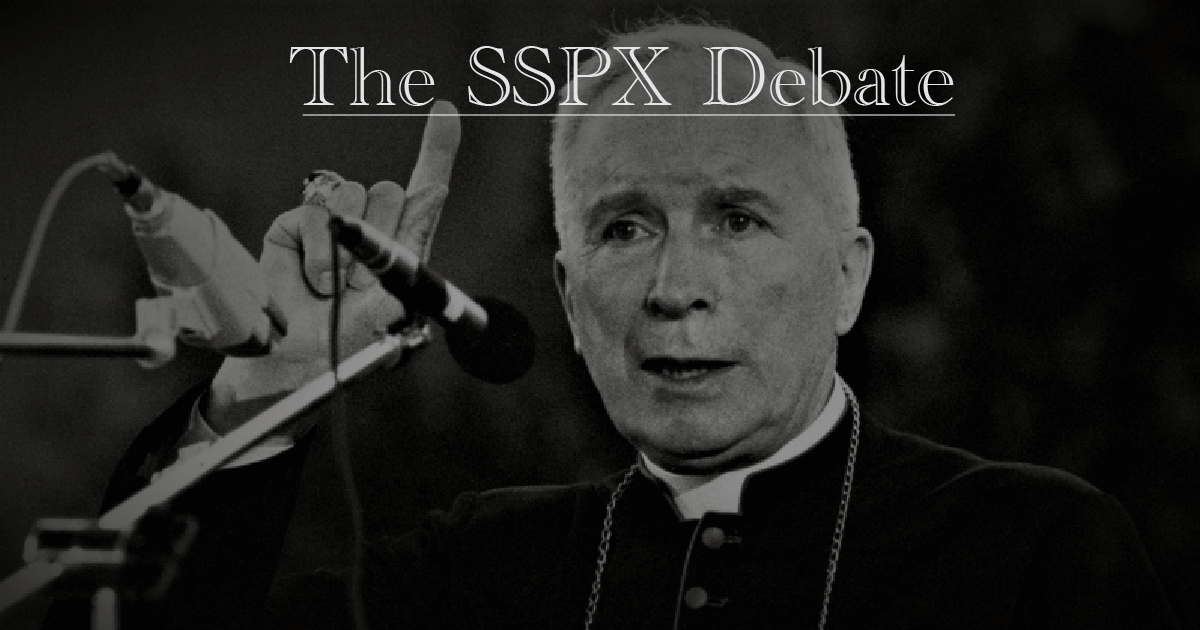 In an article entitled: “Does the SSPX Have an Extraordinary Mission?”, Mr. John Salza argues that the ministries of the Society of St. Pius X are illegitimate and, although he does not state it explicitly, should be avoided. He concludes:

Neither Archbishop Lefebvre nor any of his bishops and priests have produced a single miracle to justify their ministry without a canonical mission, even though they claim we are suffering perhaps the greatest crisis in Church history. That is because Christ did not send the bishops and priests of the SSPX. Rather, they have sent themselves, and thus, in the words of Fr. Angles (SSPX), ‘have been deceiving good traditional Catholic faithful.’

I have known Mr. Salza for a long time and have endorsed some of his prior work publicly. It pains me to have to pen this article because he had previously done much good for the cause of Catholic Tradition. I am left dumbfounded in wonder why at this precise moment in history, Mr. Salza chooses to turn on the Priestly Society of St. Pius X. I know many people that came to the Society because of Mr. Salza. His apparent intention from the article seems to be to scare souls away from what appears to be one of the only life rafts that will not be sunk by the Vatican in the coming months. With diocesan Traditional Masses and the Ecclesia Dei communities on the execution block, why at this time would he choose to turn away lost souls from a group of bishops and priests who refuse to bow to the “deep church” and thereby deny the Faith and Sacraments to the starving?[1]

The flaw with Mr. Salza’s argument is that the SSPX has not and does not claim an extraordinary mission in the sense used by Mr. Salza and the holy Churchmen he quotes. The cases Mr. Salza references are of people whose mission is per se, in and of itself, outside the ordinary mission of the Church to teach all nations and provide the sacraments. An extraordinary mission is usually one Christ initiates to introduce into history (not the deposit of the faith) a new practice or turn of history. Examples of extraordinary missions would include St. Joan of Arc leading the French army to pave the way for the French heir to claim his throne. Other examples would include the introduction of the devotion to the Sacred Heart revealed to St. Margaret Mary Alacoque, or the striking of the Miraculous Medal as revealed to St. Catherine Labouré. We could multiply examples but these few prove the point. These chosen souls were given a unique mission in history that was outside the ordinary mission of the church to teach, govern, and sanctify. By “outside” I do not mean in contradiction to that mission but indirectly supportive of it through some extraordinary means.

To demonstrate that the SSPX does not claim an extraordinary mission directly from Christ, I will quote from the ceremony in 1988 in which Archbishop Lefebvre, together with Bishop de Castro Mayer, consecrated bishops. At the point in the ceremony in which the rubrics require the reading of a mandate from Rome to consecrate, the following was read:

We have this Mandate from the Roman Church, always faithful to the Holy Tradition which She has received from the Holy Apostles. This Holy Tradition is the Deposit of Faith which the Church orders us to faithfully transmit to all men for the salvation of their souls . . . .[3]

Lefebvre does not claim to have an extraordinary mandate from Christ directly. He claims to have a Mandate from “the Roman Church,” which is exactly the way Mr. Salza claims that the mission is transmitted (from Christ to the Church to individual priests and bishops). Lefebvre is saying that the Mandate is present notwithstanding the ill-will and illegal attempts to prevent it by those occupying the offices in the Roman Church. He is still claiming the ordinary mandate of the Church although it is transmitted in extraordinary circumstances, a crisis in the Church—a crisis which Mr. Salza does not deny exists.

In prior times of crises this perennial mission of the Church has had to be exercised and transmitted in extraordinary ways. I have already mentioned the case of St. Athanasius. To this example we can add the examples of Cardinals Karol Wojtyła (the future John Paul II) and Josef Slipyj who ordained and consecrated without the normal mandate from Rome, and in fact in contradiction to the express will of the Roman authorities, during the Communist persecutions. Just like these Cardinals did not have to prove with miracles their legal right to continue the ordinary mission of the Church even in ways that contradicted the will of the Roman authorities, so too Archbishop Lefebvre and his successors have no need to prove by miracles their right to do what the Church has always done.

Mr. Salza’s comparison, therefore, to the Protestant is not apt. These heretics were changing the dogmas of the faith and undermining ecclesiastical order by claiming an extraordinary mission to propagate their heresies. In our day, the situation is the reverse. Lefebvre and the SSPX are doing what all priests did before the Council according to the ordinary mission of the Church. It is evidence of an extraordinary circumstance that what was once ordinary is condemned as “schismatic.”

One potentially persuasive argument is his appeal to the Council of Trent, which does indeed bring in a de fide proposition when the anathema condemns the Protestants who were “bishops… [not] sent by ecclesiastical and canonical power.”[4] This would indeed be a strong argument, if it applied to our situation.

Ultimately Mr. Salza either forgets a legal fact or misunderstands that fact. The Society of St. Pius X did receive a formal canonical mission from the Church in the form of the approval of its statutes and the permission to incardinate priests. If the attempts to revoke that canonical approval were illegal and invalid, then that commissioning of the Church to form and send out priests to preserve the traditional priesthood and all that pertains to it is still valid. We cannot in this short article cover all the juridical deficiencies in the attempts to suppress the Society, or the purported suspensions and excommunications. These details are related in many other texts.[5] Yet, either Mr. Salza forgets that the Society was originally given a canonical mission, or he accepts that the Church is a dictatorial tyranny and that the Roman authorities are not bound by law and justice and can effectively revoke a legitimately conferred mission simply by an act of ill will outside the law.

In other words, at its original founding in 1970, the SSPX was entirely legitimate according to Mr. Salza’s own argument. What changed was not what the SSPX was doing (which was the same thing that bishops, priests, and seminaries did before the Council), but rather the authorities in the Church unlawfully attempted to rescind that ordinary canonical mission . The current bishops of the SSPX do not come from “elsewhere.” They come from Tradition. They were consecrated and the priests they ordained received the sacrament to advance the ordinary mission of the Church not to propagate heresies. Archbishop Lefebvre went out of his way to make clear he was not usurping the ordinary mission of the Church by explicitly stating that he was not in any way conferring jurisdiction on the candidates. Even in extraordinary times only the pope can confer jurisdiction. He was merely conferring the power of orders to confirm and ordain. His careful distinction makes clear that he was not attempting to found a separate church like the Protestant heretics, against whom the anathema of Trent was directed.

Further, Salza’s list of alleged errors (in his most recent reply) of the SSPX between 1970 and 1988 is at least debatable (and no formal condemnation of these alleged errors was issued by Rome), and moreover the central claim of the SSPX – that the Latin Mass had not been abrogated – was unequivocally confirmed by Benedict in 2007’s Summorum Pontificum.

Leaving aside all the details, ultimately the question of the status of the SSPX comes down to this question: do you believe the pope and the Roman authorities are a dictatorship that can legitimately rule the Church capriciously and maliciously without being bound by divine, natural, and ecclesiastical law, or do you believe the Church is a perfect society constituted by and under law and ultimately subject to the source of all Justice, Our Lord Himself? If you believe the former, then you believe that a pope could, for example, simply for spite effectively excommunicate the entire church except himself. For me, I cannot believe that the Good Shepherd constituted his Church as a personal tyranny; I believe He constituted it as an ordered monarchy subject to law.[6] In which case, the Society of St. Pius X today continues to exercise the ordinary mission approved by the Church in 1970 notwithstanding the unlawful and ineffective attempts of the Roman authorities to interfere with the exercise of that mission. They never have and do not claim any extraordinary mission like that of St. John of Arc but merely the ordinary mission to hand on what they have received. As confirmed by the lecture of Dom David Pagliarni in Kansas City the weekend of December 10, 2021, the SSPX exercise this mission not for themselves or for some extraordinary group of people, but for the whole Church. He reiterated they are not the Church; they work in and for the Church until that day when the infiltration of the offices of the Church is ended and the manner of exercising that mission can return to normal circumstances.

[1] Editor’s note: Mr. Salza has a released a statement explaining his reasons for changing his position on his website.

[2] Editor’s note: the distinction between a De Fide proposition and a Sententia Communis (common opinion) is that the former is binding on the conscience of every Catholic, whereas the latter is a dominant view, but is not binding. It is permitted for a Catholic to dissent from a common teaching if and only if it is done on the basis of an equal or greater authority. In other words, one is not permitted to dissent from a Sententia Communis based on one’s own personal authority. See T. S. Flanders, “The Meaning of Catholic: Theological Notes.”

[4] “If anyone saith that bishops…who have neither been rightly ordained, nor sent by ecclesiastical and canonical power, but come from elsewhere, are lawful ministers of the word and of the sacraments; let him be anathema.” Council of Trent, On the Sacrament of Orders, Session 23, Canon VI (July 15, 1563).

[6] Suárez in fact states that if the Pope excommunicated the whole Church, the pope himself would be a schismatic.  Tract. de Charitate, Disput. No. 12, p. 1 in Monsignor Klaus Gamber, Reform of the Roman Liturgy, p. 35-6 & n. 27).

He is the author of The Church and the Usurers: Unprofitable Lending for the Modern Economy (Sapientia Press), The Architecture of Law: Rebuilding Law in the Classical Tradition (University of Notre Dame Press), co-author of To Build the City of God: Living as Catholics in a Secular Age (Angelico Press) and editor of A Voice in the Wilderness: Archbishop Carlo Maria Viganò on the Church, America, and the World (Angelico Press).

In addition to his teaching and writing career Professor McCall serves as the Editor-in-Chief of Catholic Family News, a monthly traditionalist newspaper, and hosts a weekly news roundup from a Catholic perspective as well as conducting various interviews of Catholic leaders and authors.  He was the coordinator of the Oklahoma City SSPX chapel from 2010-2017 and is currently a member of St. Thomas More Church in Sanford, FL.  He has been married to Mrs. McCall since 1991 and they have six children, one of whom is expecting to be ordained in June 2022 and one daughter is trying a vocation with the Dominicans of Fanjeaux.