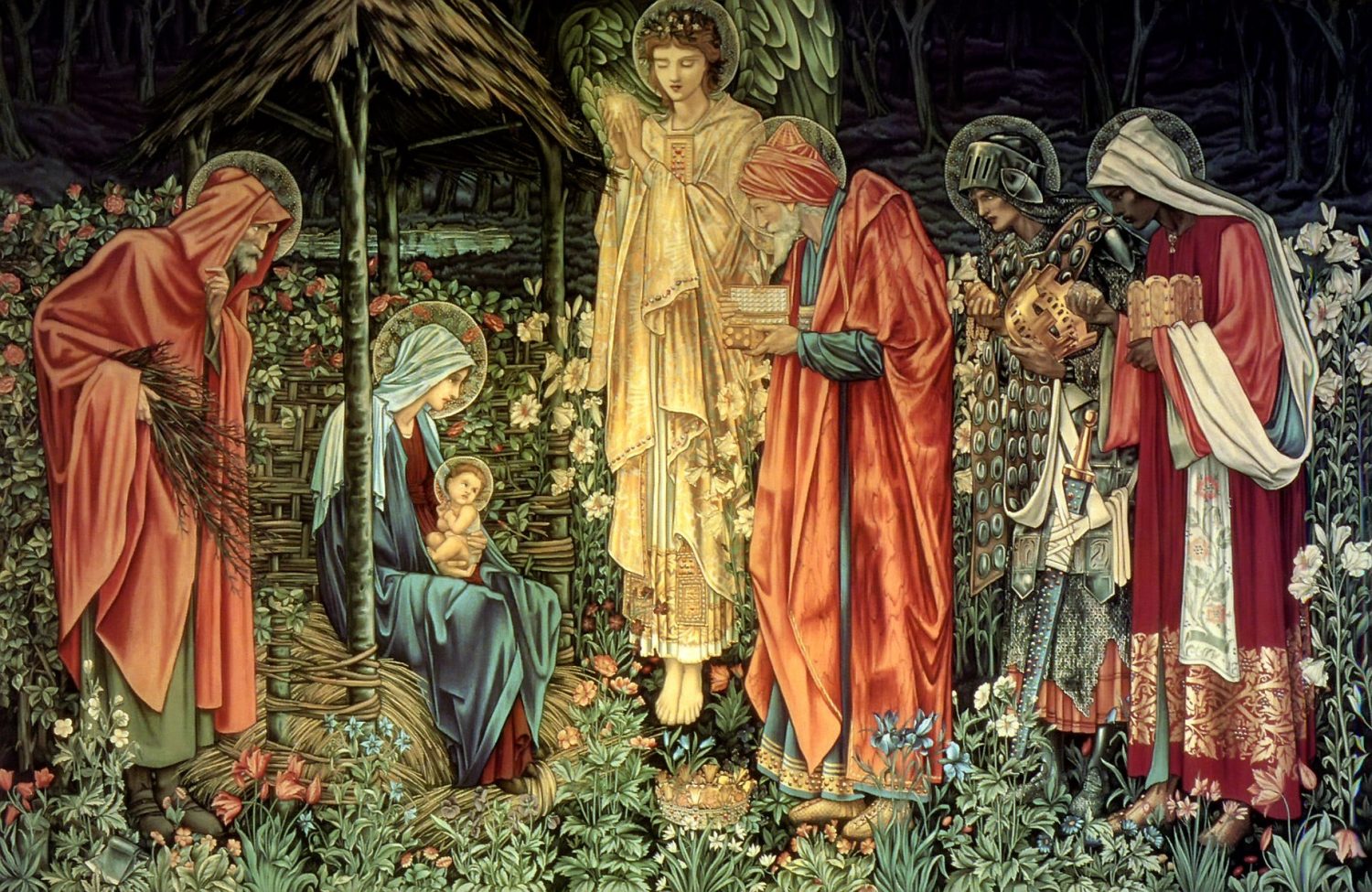 The Feast of the Lord’s Epiphany is traditionally observed on the twelfth day of Christmas, January 6th.1 In the universal law of the Latin Church, Epiphany is a holy day of obligation (can. 1246); the same law gives to conferences of bishops (with the approval of the Holy See) the right to abolish certain holy days or transfer their observance to a Sunday. In the United States, Epiphany is observed on the first Sunday following January 1st, which in 2019 falls, happily, on January 6th. On that day, the Church recalls Jesus Christ’s epiphany, or manifestation, to the Gentiles, represented by the Magi. God had been preparing the human race for this event ever since Adam’s fall from grace. The Israelites had their sacred Scriptures and inspired Prophets to prepare them. Isaiah prophesied: A multitude of camels shall cover you, the young camels of Mid’ian and E’phah; all those from Sheba shall come. They shall bring gold and frankincense, and shall proclaim the praise of the Lord (Is 60:6). The Psalmist prayed: May the kings of Tarshish and of the isles render him tribute, may the kings of Sheba and Seba bring gifts! (Ps 72:10). Saint Matthew records that, in answer to Herod’s question where the Christ was to be born, the chief priests and scribes replied: In Bethlehem of Judea (Mt 2:5), as the Lord had said through the prophet Micah.2 Micah 5:1: “But you, O Bethlehem Eph’rathah, who are little to be among the clans of Judah, from you shall come forth for me one who is to be ruler in Israel, whose origin is from of old, from ancient days.”

Although God had given the Jews the privilege of having “inside information,” it seems He had also prepared the Gentile world for the coming of His Son. Pagan philosophers and historians, such as Cicero, Tacitus, and Suetonius, testified that the world was in expectation of a new Kingdom of peace and righteousness under the rule of a glorious Deliverer who would come, not only from the East, but from Judea. Plato and Socrates also spoke of the Universal Wise Man “yet to come.” The Greeks had outgrown their gods and held empty niches ready for unknown gods. And in Rome, forty years before the birth of Jesus, the poet Virgil disturbed Caesar Augustus with his anticipation of the birth of a boy who will “receive the life of gods” and bring a Golden Age to the world.3 Eclog. iv: “The last age foretold by the Cumean Sibyl, is at hand; a new and glorious era is coming: a new race is being sent down to earth from heaven. At the birth of this Child, the iron age will cease, and one of gold will rise upon the whole world. … No remnants of our crimes will be left, and their removal will free the earth from its never-ending fear.” As quoted in Prosper Guéranger, The Liturgical Year, Vol. 3: Christmas–Book II, 4th edition, trans. L. Shepherd (Westminster, MD: The Newman Press, 1948), p. 167. The time was ripe for the coming of the Savior, and Jews and Gentiles alike sensed it.

A star appeared, and the wise men of the East—perhaps they were Persians or Arabs—were certain that it signaled the birth of the King of the Jews, so they went to Jerusalem to inquire where He had been born. After their audience with the scheming Herod, they made the five-mile journey to Bethlehem and, finding the Child, adored Him and offered Him the gifts most valued in the East: gold, frankincense and myrrh. Gold is offered in tribute to a king; incense, in sacrifice to a deity; and myrrh, a fragrant resin, is used to embalm or sprinkle on dead bodies—an odd present for a newborn baby, to be sure, but a clue to why He came into our world. Perhaps these pagan sages realized the Christ-child to be the fulfillment of the hope of Israel. Even so, why should they care?

The Magi probably belonged to the great astronomical tradition that had developed in Mesopotamia over the centuries. Most likely, they were aware of the prophecy of the Gentile prophet Balaam: A star shall come forth out of Jacob and a scepter shall rise out of Israel (Num 24:17). They explored this promise.

The Epiphany hints at an important truth which Christ and the Apostles would later make explicit, namely, that salvation is from the Jews, but is not for the Jews only. God excludes no one from His plan of salvation. The risen Lord ordered the Apostles to go and “make disciples of all nations” (Mt 28:19). And St. Paul declares that the Gentiles are “coheirs” (with the Jews), “members of the same body, and copartners in the promise in Christ Jesus through the Gospel” (Eph 3:6). The family of Christ, the Church, takes in all people: it is, in a word, catholic, universal.

It took the Apostles and the earliest Christians some time for this truth to sink in. They were Jews who continued to practice Judaism after coming to believe that Jesus of Nazareth was the longed-awaited Messiah, God’s anointed and Suffering Servant whose life, death and resurrection fulfilled the ancient prophecies. On the Sabbath they would go to the synagogue or the Temple, and on Sunday celebrate the Eucharist. The first great crisis in the Church involved the question whether Gentile converts to Christianity first had to become Jews and observe the Law of Moses in its entirety (which, in the case of males, would include circumcision). Around the year 49, the Council of Jerusalem was convoked to resolve the case (see chapter 15 of the Acts of the Apostles). Under divine guidance, James, who with Peter led the Jerusalem Church, declared that the Old Law had passed, for the Church is now living Judaism’s fulfillment. The Law given through Moses and explained by the Prophets was God’s gift to His People, a kind of anticipation of the Gospel that brings the old covenants to their perfection. Anyone who would oblige Gentiles to become Jews, as a previous step to their becoming members of the Church, was erring against the Truth.

The visitation of the Magi, then, is more than a quaint episode in Our Lord’s infancy, “a gorgeous splash of oriental color in the dimness of the stable.”4 Francis J. Sheed, To Know Christ Jesus (1962; repr. Ignatius Press, 1992), p. 57. Its true significance—the journeying of humanity toward Christ, through whom and for whom all things were created (cf. Col 1:16)—should stir us to become more involved in leading others to the Lord. First, of course, we ourselves must believe that Jesus Christ is “the way and the truth and the life” (Jn 14:6). This has been the Church’s faith from the start. To hear it and to accept it in faith is to be evangelized; to tell others about it is to evangelize. To evangelize is to open for others the way to a loving relationship with the Lord, a relationship lived out in the Church that He founded to dispense the grace by which alone that relationship is made workable.

While the Church will always need missionaries to proclaim the Gospel in faraway lands, evangelization begins at home. Materialism and hedonism attack the values of large, close-knit families. The contraceptive mentality treats children as an intrusion and fertility as a curse. Fundamental Christian beliefs about the sanctity of every human life and about the meaning and purposes of marriage no longer find broad cultural and institutional support. The media pander to our basest instincts. An aggressive form of secularism persists in eliminating all traces of our Judeo-Christian heritage, accommodating levels of brutality and vice reminiscent of the ancient barbarians. In many ways, we are back in the days of the Apostles.

With good reason, then, did Pope St. John Paul II call for a “New Evangelization.” Does this mean that Catholics and other Christians should bring up Jesus in every conversation, or stand on the street corner preaching to all who pass by? Probably not. We have to watch for people when they are ready to hear the message. We must find ways of re-proposing the Gospel to the modern, post-Christian West.

Christianity is not made real on earth until it is embodied in the way Christians live and work. A deep piety and drive to personal holiness is important, to be sure. The Christian witness of our lives is critically important. But evangelization also aims at social holiness, the proper ordering of our civic life. Evangelization involves the law, for the law is a teacher. It will teach, for instance, that marriage is a reality whose contours people cannot make and remake at will, or it will teach that marriage is a mere convention, which individuals, couples, or, indeed, groups can choose to make of it whatever suits their desires. To adduce another example, the elevation of suicide and euthanasia to the status of a basic human right has convinced Dutch teenagers that suicide must be a reasonable, even admirable, solution to the problem of human suffering of whatever cause.

With this in mind, Catholics and other committed disciples should be determined to play their full role as citizens in all the legitimate avenues of social and cultural life, promoting civil legislation in harmony with divine law and human dignity. Of course, there will be those who accuse us of attempting to impose our religion on a pluralistic society, as if we were trying to force all Americans to abstain from meat on Fridays, and they would be mistaken (as I explain HERE). So be it.

As we celebrate Christ’s Epiphany, let us beg the Holy Spirit to deepen our devotion to the Person and teachings of the universal Savior, who became man to show us in a human way how much God loves us. May we also confide ourselves to the intercession of the Blessed Virgin Mary, Star of the New Evangelization, and of St. Paul, the great Apostle to the nations.