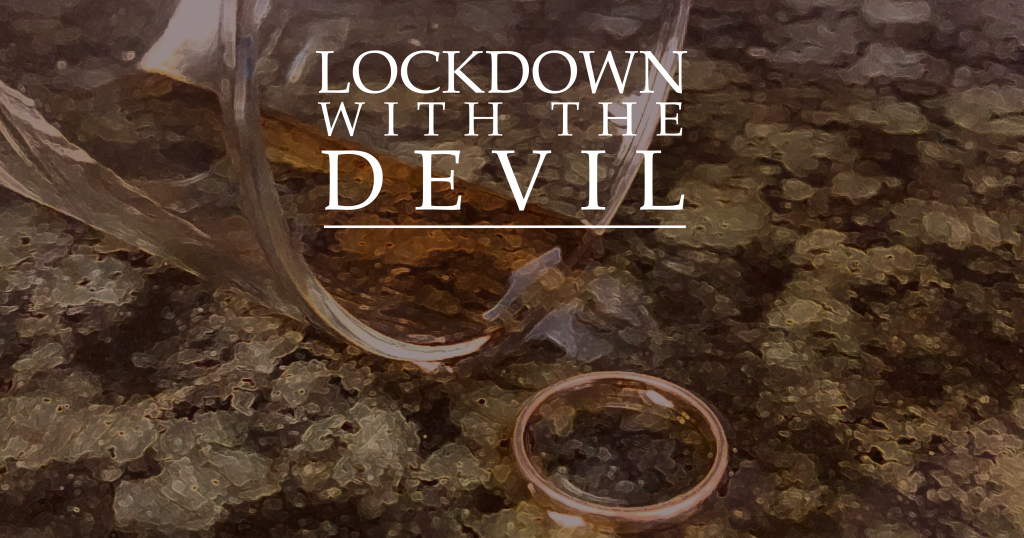 The quarrel you have described that took place between the couple has been perhaps the most encouraging thing I have read in quite a while. It was a veritable explosion, which I might add, you nicely facilitated by sprinkling just the right amount of nitroglycerin on the missiles they hurled at each other like belligerent drunkards. It was perfect timing that she walked in the door after a long and arduous day of inputting records into the computer system at the medical clinic, only to find him drunkenly asleep on the couch with his notice of termination opened on the computer on his chest. She realized in an instant that he had been lying to her for weeks, and the stark reality that her husband was now an unemployed drunkard hit her hard. You had your devils immediately swirl about in her mind the notion that they would have to seek more financial debt in order to keep their home and overextended lifestyle. What’s more, you even contrasted her natural reaction of despair with an artificially inflated ego that sent her into a sanctimonious rage. Your recent improvement in professional acumen is proof that I can re-engineer the most incompetent of pupils.

Because the family does not have any philosophical or religious foundation, the ideas that bind them together are fortunately fleeting or lacking. Like many modern couples they strongly identify themselves with their professions. The husband enjoyed a certain level of respect and influence at his job, but thankfully that is all gone. The Enemy did create the males to work when He placed the First Man in the Garden, and therefore a man cannot be happy unless he does something he deems useful with his time. The simple fact that he is at home rotting away, while his wife is at work doing something she finds important, is enough to foment helpful resentment. Watching her come in the door after a day’s work is painful for him, especially since he resents the lock-down itself as the cause of his termination, all the while her industry is praised as a saviour. These factors played well into their dispute, and the way he whined like a toddler about things being “unfair” was only overshadowed by the magnificent manner by which she emasculated him. “You’re not even providing for your family,” she screamed, and “you have never been good at handling the finances,” she added. Both of these things are fortunately true, and they cut him ever so deep.

Now, these comments by the wife were factual, but they felt like saccharine venom coming out of her mouth, because she knows she is as much to blame as anyone. Her feminist belief set—the almost universal position of modern society—tells her that she should always be “independent” and not rely on a man to provide any security. She never truly internalized this at the deepest level, nevertheless she has lived as if it were true. The husband, not willing to be “sexist,” always encouraged her in whatever feminist fantasy she proposed. The overextension of their finances that has led to an unpreparedness for any monetary dryness is as much her fault as it is his. The renovations, new cars, fashionable groceries and constant overturning of the wardrobe were all her ideas. Virtually all their debt could be pinned on her spending habits and spoiled disposition. When she berates him for not providing she knows that she is living in a lie for which she is largely responsible. Not only is her marriage full of lies, but so is her profession, and she knows it.

She receives very few patients coming through the office and knows not a single soul who has fallen seriously ill, yet she still tells herself that she is part of the “front line,” as if in military formation they are battling the onslaught of a resurgence of the Spanish Flu. She knows by experience this is not true and that in reality the sickness has been largely overblown, and even better, she understands quite well that there is no need for all the measures that are ruining the financial stability of her family and countless others. In fact, many in society know this as well as she does, but this woman is simply a microcosmic representation of the willingness of the majority to live a lie in order to move with the whims of the culture. In addition, the praise and sense of importance for people who work in her field has a narcotic effect: the majority of health system employees are utterly addicted to the fictitious adulation they now garner for simply taking pictures of themselves wearing cloths over their mouths

You remember how I spoke some letters back about the usefulness of public pressure as a way to shame? Well, anyone who stands in opposition to the current virus-narrative is seen as a heretic, and they are consistently discredited. Even a mild skepticism of the narrative is a current form of unforgivable error with consequences rivaling those of all the myths we inspired about the Inquisition. We just received word that medical doctors alike are not immune to the public lynching, with some now being terminated from their professions for expressing a different medical opinion!

The idolatry of the health-care system is currently our most valuable weapon. You might think other institutions are more valuable, but all state organizations—and even families—now serve the dictates of the so-called “medical experts.” On one day they may instruct the underclasses to cover their face with a handkerchief and stay far from other members of society, meanwhile the next week they say nothing when politically expedient groups of adolescents gather by the thousands. The modern academic is a Cartesian by nature, but they have gone one step further from that faithful servant; instead of saying “I think therefore I am,” they say to themselves “I think therefore it comes to be.”

Their society now worships the human body—a most effective form of self flagellating paganism—and the medical chieftains are the High Priests of this hellishly delectable religion. When they speak on television, the hypnotized rodents hang on every word as if their heads move side to side following a piece of rotten cheese. For decades the powers that be have touted the notion that every man must make his own informed health decisions, yet now we have inverted the neopagan orthodoxy so that every man must do whatever his master tells him, even when it goes against reason. At the beginning of the ordeal all were convinced that there was nothing to worry about, then they were frightened into submission, and now—when it is obvious it is not a plague—believe that if they do not wear a dirty rag over their mouths they are somehow “putting others at risk.” We may as well be shooting bullets at their feet and commanding them to dance.

Society is now largely divided into two camps: one who embraces the virus as if it were an identity, and another who sees through the nonsense and feels as if the other half of society has gone mad. The former group is either terrified of their own death or social ostracisation, that they justify a constant consumption of contradictory dribble from all levels of government with the simple phrase, “the experts have said.” In a splendid twisting of the mind, they now find a vibrant community of lively comrades by uniting in groupthink over a pathogen that they believe will kill them or their reputations. The latter group sees through the lies, but they are still largely harmless to our ultimate goals because the majority are driven to despair. Most of this group has been disciplined to acquiesce. They walk around with a mounting rage in their bellies, hating the neo-religious rituals of hand washing and spit covered face shields, but they are impotent and useless.

The woman belongs to the former group, and the husband belongs to the latter. You have done efficient work in prompting them to view each other as contemptible morons. He views her as the thoughtless sheep that she is, and she rightly views him as a powerless stooge.

Presently the tension is boiling over and they cannot hide it from the children. In fact, have you looked into their eating habits? I venture that they have lost all routine as a result of this timeless sojourn. When a family ceases to partake in mealtime with one another, it is evidence they have essentially isolated themselves in relation to the most basic of human activities. Eating together facilitates conversation, temperance and raises their level of happiness; it is a dreadful habit. Do everything you can to escalate the tension in the household to a degree where the members of the family feel as if they are walking into a room with thick and humid air when the parents are present together. Ironically, if you keep the parents from speaking to one another, even while standing shoulder to shoulder, the silence will facilitate a deafening interior dialogue that fans the flames of discord.

Now, as much our recent letters have been filled with good news, the children are still praying, even together. I expect a solution to this problem in your next letter, we cannot afford any assistance from the Enemy to ruin our fun.