“Mass of the Ages” may have had humble beginnings—after it was funded by a grassroots lay initiative—but I can imagine a moment where the team of young men behind the scenes awoke to the realization that this wasn’t an ordinary film. Whether Thomas Shannon’s awe-inspiring cinematography, Christopher Amodio’s quintessential color grading, or Mark Nowakowski’s sensational score, the movie’s production had all the mixings of something truly great. And if any doubt remained, it was certainly washed away under wave after wave of priests and bishops, scholars, and laypeople telling the tale of how the Traditional Latin Mass totally transformed their lives.

Of course, much can (and should) be said regarding every jot and tittle of the film, but I was particularly moved by something said by Dr. Taylor Marshall. For beyond the saddening statistics concerning the shortage of Catholic priests or the tragic loss of faith among the laity, there was (as Marshall so eloquently said regarding the brilliance of the Blessed Sacrament nestled within the setting of the traditional Roman rite) a kind of diamond in this film. This diamond was cut deep by the Great Lapidary, through which the light of Christ seemed to shine most bright…that being, the Mauss family, the central narrative of the film.

The movie began, symbolically enough, with a well-lit scene proceeding toward the illustrious high altar at the Oratory of St. Francis de Sales in St. Louis, Missouri, followed by a descent through the dimly lit sanctuary of Our Lady of Mt. Carmel in Littleton, Colorado. The optics were captivating, but then, toward the tail end of the departure, the camera gently glides between rows of candles…candles twinkling alongside the black funeral pall of a casket. I shuddered at the sight, and I worried whether this film wasn’t what I’d expected—or, maybe more accurately, that it was more than I was prepared to handle. The answer came seconds later, with a somber scene at a cemetery, where a family huddled together in prayer.

It was jolting, and tears flooded my eyes, as I saw at this moment a reflection of my own experience. And while I was yet unsure where all of this would lead, one thing was certain: “Mass of the Ages” wasn’t a film I could watch on my own. It was, as the aftermath of my daughter’s death with childhood brain cancer, a family affair, something we were destined to experience together. So I rushed to the family room and told them that I had something I wanted them to see… and, more importantly, I told them that I needed them, through to the end by my side.

And it was true, for scene after scene struck so many heartstrings, composing a kind of chorus involving the most bittersweet of memories and emotions. Things we’d seen, things we’d felt, things we’d loved and lost… many of them so agonizingly beautiful, but all of them things we had to do. The comparisons were endless, too! The father, Michael Mauss, was diagnosed with a glioblastoma, given only 12 months to live. My daughter Sami, at only 10-years-old, was diagnosed with anaplastic astrocytoma, which took her life after a mere 16 months.

There was the story of Michael, shortly after learning of his diagnosis, smiling on a hospital bed, assuring everyone he’ll do his best and that everything will be fine. This fit the exact description of a video Sami made for her supporters shortly after learning she had cancer. And there was the tear-jerking scene of Michael and Kristine renewing their wedding vows, which reminded us of the time a priest prayed a blessing over my daughter, whom he lovingly referred to as “Fire Toes.”

Watching this was almost overwhelming, and everyone was in tears, but it was the aftermath of Michael’s death that hit me most profoundly. Like Kristine after the loss of her husband, the death of our daughter left my family in limbo, unsure of what the future held in store. By that time, I was a Catholic turned apostate, adrift in the raging seas of secular atheism, lacking what Kristine calls “the solid foundation of tradition.” But like Fr. Illo points out later in the film, “There’s a lot of questions that kids normally have, and if those are not addressed… they’ll go somewhere else to find the answers.” And my kids had some serious questions!

“Who built the universe, Papa?”
“What is right and wrong, Papa?”
“Why don’t you ever pray, Papa?”

I addressed them, of course, but I knew I was wrong, and they knew it too, so they continued, even asking to see what church looked like. I did my darnedest to distract and dissuade them, even going so far as to show a series of videos from popular Protestant denominations, banking on the idea that they’d find it all very laughable — and they did. But it wasn’t enough, as one of them quickly replied, “But are we Catholic, Papa?” It was specific, and with names like Athanasius, Ambrose Louis, and Teresa Avila Lucille, it was definitely “a God thing.”

As an Atheist, I finally conceded to our children’s request for “God.” So like any parent in the 21st century does, we showed them YouTube videos of different religions: Buddhism, Islam, Judaism, as well as the Novus Ordo rite. But when we showed them a video of the Latin Mass, my barely-catechized children understood that that was the only place they sought to find God. Their decision was unanimous: we would go to Christmas Vigil at the local parish where Ambrose’s godmother attended… and where, unbeknownst to us, the priest who blessed my daughter just so happened to preside.

At one point in the film, Crisis Magazine’s Editor-in-Chief Eric Sammons says, “The first impression [of the Latin Mass] for some people isn’t always a positive one because it’s so different from anything they experienced…they really just don’t know what to think.” That’s true for some people. For others, that foreign feeling of something timeless and transcendent, something set apart in (and beyond) space and time, is just what they’re looking for and exactly what they need. Kristine knows this all too well, insisting, “The idea of eternity, it smacks them in the middle of the eyes every day.” For the Mauss family, it’s where their dad is. For us, it’s where Sami lives, always smiling, dancing care- and cancer-free for all eternity. And Kristine’s right: “it’s not to make everything about death, but this life is not what we were created for…and to walk my children into heaven however I can is the number one priority of my life.” 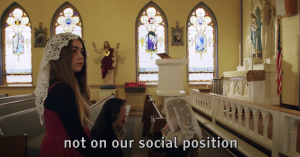 Conveniently enough, our journey played out in a way that can be summed up by different quotes from the film. There’s Fr. Illo’s story of the woman who recognized, through the quiet and humbling lens of the Latin Mass, her desire (and complete lack) of control. There’s Fr. Joshua Caswell, SJC, detailing how the goal of the liturgy is not to evangelize but to worship God, and yet, how

“So many atheists, Satanists, and other people wander into the church, knowing little to nothing about the Catholic faith, and yet are seemingly drawn to it because there’s an experience of something bigger than themselves.”

And Dr. Peter Kwasniewski’s description of how the prayers at the foot of the altar start us slowly and carefully, “preparing us for the ascent up the Holy Mountain,” granting us a sense of our sinfulness and

“A chance to wake up to what we are doing, to catch up with what we’re doing—in a way, to slow us down… [serving as] a period of preparation, a period of transition that takes us from secular life to this timeless domain of the sacred.”

I was an atheist, but I experienced God at the Latin Mass. And just the married couple recalling their humorous first experience at a Latin Mass—“What’s crazy is that we came back, we kept going”—suddenly we found ourselves returning every Sunday to the traditional Roman rite. For now, like Kristine, my goal and number one priority from that point onward was to “walk my children into heaven however I can,” and that

The way I have been able to reorder my life [as a parent] has come from traditional Catholicism… it has completely, radically transformed every aspect of our lives… it is a liturgy and a way of life that breeds incredible peace and freedom… it’s a refuge… from this crazy scary world, and it’s the space where I can just place the cross down for a little bit.

Kristine finishes that line of thought with a question: where would we be without this? To which I echo her answer, “I don’t know,” adding only, “in a sea of sorrow, a desert of despair… anywhere (and everywhere) but Rome sweet home.”

And this is the story of countless souls across the world whose lives have been transformed by their encounter with God in the Mass of the Ages. Pope Francis seems to have largely hinged his recent motu proprio on the claim that the Latin Mass is “tied more to the desire and wishes of individual priests than to the real need of the ‘holy People of God’” (Letter Accompanying Traditionis Custodes). From the grassroots funding for the film, to the stories related therein, to our own experience and those of thousands more, this claim of “clericalism” could not be further from the truth about the liturgy of our forefathers.

The film elevates the Mauss family brilliantly, set in the cinematic Golden Hour, with Kristine standing with her children along the water’s edge of a lakeside shore. Whether dusk or dawn, it doesn’t matter, for, as had become evident throughout the film, the Mauss family lives, moves, and has their being in the inextinguishable light of an everlasting fire, one that burns brightly in their hearts, shining forth, mysteriously, through the collective twinkle in their smiling eyes for all the world to see. And behind them, almost prophetically, a skyline of heavenly hills, coruscating clouds, and solace, hidden, yet ever-present, distant, but only for a time. And, as it is with faithful Catholics tethered to the Traditional Latin Mass, it’s saddled on a circuit, providing warmth and light, as it was in the beginning, is now, and will be forever, world without end, amen.

Mass of the Ages is a MUST-SEE movie fit for people of all ages. As for me and my family, we give it a resounding 5/5 stars. We are eagerly awaiting the premiere of Episode II which hints at addressing the real history of our liturgical chaos and the crisis in the Church.

Photo credit: provided by the author.

Jeremiah Bannister is a writer, YouTuber, and public speaker. After serving in the U.S. Navy, he earned a degree in Journalism & Mass Communication, with a minor in Political Science, from Olivet College (Michigan), where he was awarded the school’s top-honor in three specialties: creative writing, political science, and public speaking. Since then, he has hosted a local TV show, served as a contributing editor for the Distributist Review, and hosted a live AM/FM talk radio program (PaleoRadio). Jeremiah has presented before audiences at Michigan State University, Ferris State University, and Campellsville University. He currently hosts Paleocrat Diaries LIVE on Meaning of Catholic, which airs every Wednesday and Friday morning at 10 a.m. EST on MoC’s YouTube channel. To learn more about his work or to schedule an interview/event, contact him at [email protected].