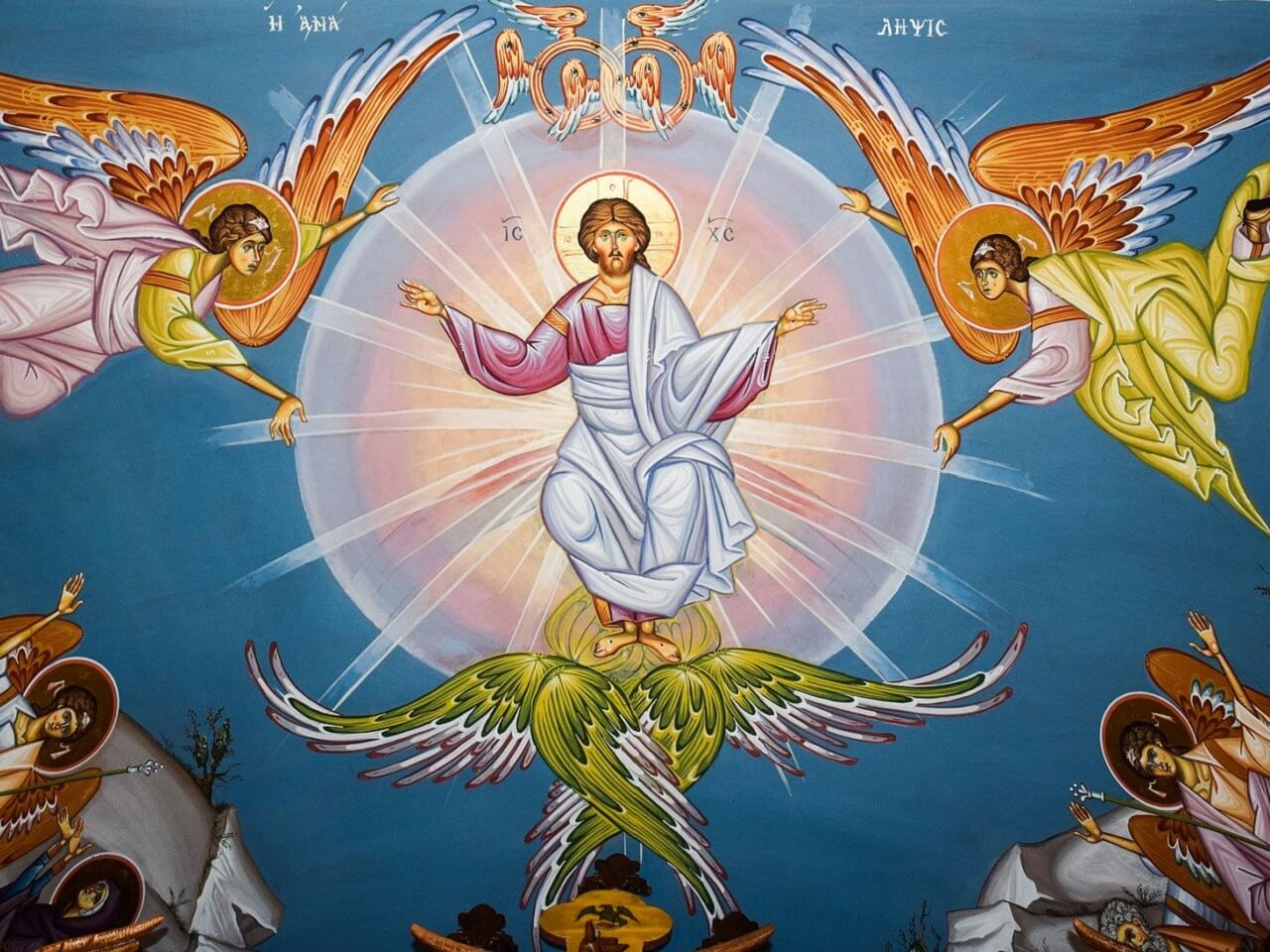 On Thursday, May 22 of this year, the faithful entered the season of “Little Advent,” the Lord’s own novena given to the apostles: Ascensiontide. Just as in winter Advent, the Church waits in joyful and fearful expectation for the Lord’s coming in the flesh, the Little Advent of Ascensiontide awaits a mysterious and unknown power promised by the God-Man. The Lord commanded this novena to be accomplished when He said in St. Luke: I send the promise of my Father upon you: but stay you in the city till you be endued with power from on high (Lk. 24:29). And again in the epistle of the Feast:

He commanded them, that they should not depart from Jerusalem, but should wait for the promise of the Father, which you have heard (saith he) by my mouth. For John indeed baptized with water, but you shall be baptized with the Holy Ghost, not many days hence (Acts 1:4–5).

Here we see a parallel at the end of our Lord’s public life to the beginning of His public life, at which time John testified: [H]e that shall come after me, is mightier than I, whose shoes I am not worthy to bear; he shall baptize you in the Holy Ghost and fire (Mt. 3:11). The inauguration of the Kingdom of God is about to begin with fire, but we will return to this below. Our Lord has come to destroy the work of the devil (1 Jn. 3:8). Therefore, as the Easter Sequence Victimae paschali laudes says:

Death and life contended
in a spectacular battle:
the Prince of life, who died,
reigns alive.

He has come as King to conquer the Kingdom of Satan and establish the Kingdom of God. Before He can take possession of His Kingdom, He had to fight and overcome the false king. As St. Paul says elsewhere: that, through death, he might destroy him who had the empire of death, that is to say, the devil: And might deliver them, who through the fear of death were all their lifetime subject to servitude (Heb. 2:14–15). Satan is the false king who holds the empire of death; His Majesty Jesus Christ is the true King who, coming to the mountain of Ascension and despoiling the principalities and powers, he hath exposed them confidently in open shew, triumphing over them in himself (Col. 2:15). Therefore, He says as the King Who has now conquered and subdued the empire of death:

All power is given to me in heaven and in earth. Going therefore, teach ye all nations; baptizing them in the name of the Father, and of the Son, and of the Holy Ghost. Teaching them to observe all things whatsoever I have commanded you: and behold I am with you all days, even to the consummation of the world (Mt. 28:18–20).

All power once held by the false king has now been given to the rightful heir to the throne — the Davidic ruler who is Justice Incarnate. Conquer the nations, he says, therefore, and extend my rightful authority over the whole Earth — but not by conquest the sword, as the Muhammadans will do, but by preaching. In this way, the kings who formerly worshiped the false king would then worship the true King. St. Augustine:

The gospel of Christ was preached in the whole world, not only by those who had seen and heard Him both before His passion and after His resurrection, but also after their death by their successors, amid the horrible persecutions, diverse torments and deaths of the martyrs, God also bearing them witness, both with signs and wonders, and divers miracles and gifts of the Holy Ghost, that the people of the nations, believing in Him who was crucified for their redemption, might venerate with Christian love the blood of the martyrs which they had poured forth with devilish fury, and the very kings by whose laws the Church had been laid waste might become profitably subject to that name they had cruelly striven to take away from the earth, and might begin to persecute the false gods for whose sake the worshippers of the true God had formerly been persecuted. [1]

The little novena of the Ascension is the transition from the kingdom of Satan to the Kingdom of God. The King ascends His throne and commands his ambassadors (II Cor. 5:20) to announce His reign to His newly received subjects throughout the world. Give them the good news, He says, that the reign of Satan is at an end. Give them the good news that their slave master has been driven out. Do not fear him who can kill the body (Mt. 10:28), for since I have overcome death, the kings who worship Satan and rule by means of his power of death will be forced to bow before me. The kings will be subject to me, even as I am named King of Kings and Lord of Lords (Apoc. 19:16). I have broken the power of death, therefore these false viceroys of Satan no longer have any power over you. This is why the apostles must complete the novena of the Ascension, because they must have power from on high in order to face down the empire of death.

At the Ascension, the apostles know that the Kingdom is at hand, for they ask: Lord, wilt thou at this time restore again the kingdom to Israel? (Acts 1:6). But St. John Chrysostom explains that “they had not any clear notion of the nature of that kingdom; for the Spirit had not yet instructed them” [2]. And Venerable Bede says that “the disciples, who were still materially minded, believed that, since the resurrection of Christ had been accomplished, the kingdom of Israel would come immediately” [3]. For yet as the King had spoken to them for forty days of the Kingdom of God (Acts 1:3), He had also said before His final battle with Satan (Gospel of the Fourth Sunday after Easter):

I have yet many things to say to you: but you cannot bear them now. But when he, the Spirit of truth, is come, he will teach you all truth. For he shall not speak of himself; but what things soever he shall hear, he shall speak; and the things that are to come, he shall shew you (Acts 16:12–13).

Therefore, it is the Holy Ghost who makes effective the reign of Jesus Christ the King and communicates the full truth about the nature of this rule. Just as in the Incarnation the King is born by the Holy Ghost, so after He has despoiled the kingdom of the false king and ascended His throne, the Holy Ghost liberates His subjects from the false king so that the True King can possess His domain. The first liberation is a liberation from falsehood, the illumination of the mind. Then you shall know the truth and the truth shall set you free (Jn. 8:32).

But this reign is not just in our hearts. Pius XI: “If, therefore, the rulers of nations wish to preserve their authority, to promote and increase the prosperity of their countries, they will not neglect the public duty of reverence and obedience to the rule of Christ” [4]. There are only two kingdoms: the false kingdom of Satan and the True Kingdom of Jesus Christ. Rulers cannot legitimize their rule if they refuse to acknowledge the True King. For they must then serve the false king — He that is not with me, is against me: and he that gathereth not with me, scattereth (Mt. 12:30). As St. Augustine said above, the kings who formerly served the false king Satan and his demons must be subjected through the Gospel to the True King, and thus liberate their subjects from slavery to Satan.

We see two errors regarding the Kingship of Christ that are answered by the Ascension novena and Pentecost. On the one hand, the disciples look for a merely earthly kingdom. They seek the kingdom of Israel alone, but the King of Kings has received all power in heaven and on earth — all peoples, tribes, and tongues shall serve him: his power is an everlasting power that shall not be taken away: and his kingdom that shall not be destroyed (Dan. 7:14). It is not merely material; rather, it destroys the work of the devil, that false ruler of the false kings — the fallen angel by which the kings of this world rule by the power of death.

Since the spiritual power behind these kings is broken, so too is their illegitimate rule on this Earth. Thus, on the other hand, His rule is not merely spiritual — thy kingdom come on earth as it is in heaven. The rule of Christ is indeed extended by the preaching of the Gospel, not Muhammadan conquest. Yet the kings must acknowledge Him, for he is the Lord thy God, and him they shall adore (Ps. 44:12). And again, all the kindreds of the Gentiles shall adore in his sight. For the kingdom is the Lord’s; and he shall have dominion over the nations (Ps. 21:28–29). Even Vatican II teaches that “men and socieites” have a “moral duty … toward the true religion and toward the one Church of Christ” (Dignitatis Humanae 1) and calls this “traditional Catholic doctrine.”

Our Lord ascends His throne in Heaven to show that His kingdom is not of this world — not merely material. Yet He sends the Holy Spirit to make His rule is effective on Earth as it is in Heaven — not merely spiritual, so that every kingdom and government in this world may bend the knee to the Holy Name of Jesus. These are the deeds of our fathers, who by the Holy Spirit fearlessly converted emperors and kings who reigned through death and built that great civilization called Christendom.

This Ascensiontide, let us remember eleven men and the Virgin Mary, waiting for the promised power from on high, and marvel at how this power changed the world forever. The King still sits upon His throne, sending His power from on high. Therefore, let us not worry about the world crumbling before us, nor become despondent about the Church and the virus crisis. Seek ye therefore first the kingdom of God, and his justice, and all these things shall be added unto you (Mt. 6:33).

[3] Venderable Bede, from the commentary on this passage from St. Thomas’ Catena Aurea